Improvements in technology have led to innovative education tools. What does the future hold for students?

Improvements in technology seem to be more prevalent than the rise and fall of the sun. Each day there are a multitude of announcements in the tech industry, ranging from a new tablet to revolutionary software proven to increase productivity and connectivity.

Being a recent graduate, I have been incredibly jealous of the introduction of technology into education. Barnes & Nobel has introduced the NOOKstudy, CourseSmart has been updating their eTextbook offerings, the iPad is revolutionizing publishing and lesser-known companies are entering the field. 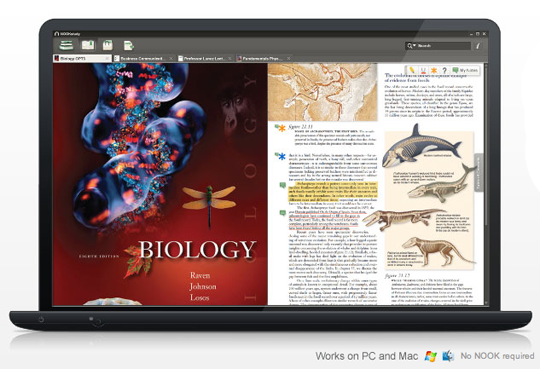 This week’s announcement of B&N’s NOOKstudy should not come as a surprise. With some analysts predicting over 20% of textbooks sold in 2014 being digital, it is natural to assume large retailers like B&N will enter the space.

This software, free to download, hopes to capture the majority of the market. Some enticing features include the ability to work with multiple textbooks simultaneously, take notes within a text, search and even highlight passages. Furthermore, users are able to access their eTextbooks purchased on multiple devices.

The recent release of the iPad, a multi-touch tablet sometimes referred to as an enhanced eReader, arms publishers with a new tool to create valuable content for educational purposes. Some of the most interesting applications have yet to be released, but expect to see truly interactive content appearing in the near future. Imagine a child having a truly personal conversation with a book character, the ability to illustrate the story themselves or deciding the characters next step (i.e. “gamebooks” from the 90s).

Knowledge Now has created and is currently producing a folding tablet positioned to become an educational staple. Coined, the “Kno,” this device has two touchscreen panels allowing users to “write on, highlight on, watch video on. And, oh yes… read on!”

All I know is that I really want the Kno! Watch the video below.

I am interested to hear your thoughts. Do you wish that you had this technology while in school? Will technology increase retention or distract from lectures? Any predictions

@BradAT *one of the things needed....

RT @stanine Lots of early companies looking for a landing pad rn. To the founders, plz remember: - Your seed investors expect $0 from their investment - Acquirers will probably not keep your product alive, even if they say they will - You will be highly valued for having tried and failed

@anthonykatsur This set up is larger than my Airbnb 🤯